Why Use Valve Sealants? 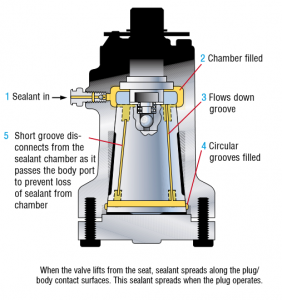 Drop-Tight Seal – To secure an absolutely tight seal, the film of the sealant works to form a seal between the sealing surfaces of the valve. The seal is formed by sealant transmitted through a system of passageways around the valve port. With proper selection of sealant for your particular service, the seal can be retained over a wide range of temperatures and pressures.

Lubrication – Prevents metal-to-metal contact of the valve sealing services by filming over bearing irregularities. No matter how finely ground a metal surface may be, the metal is a series of peaks and valleys. As one metal slides against another, friction is set up and adhesion, shearing, or plowing may result. A protective film of sealant over the bearing area prevents metal-to-metal rubbing.

Renewable Seat – There is no need to disassemble a lubricated valve or remove it from service to replace mildly damaged seats. Sealant, as a structural part of lubricated valves, provides a flexible and renewable seat, eliminating the necessity of force fit contact to effect a seal. For this purpose, the sealant not only must have proper plasticity, but also resistance to line fluids such as solvents and chemicals. Sealant forms a seal between the sealing surfaces of the valve even under pressure.

Plug Jacking – The fundamental operating principle of the traditional lubricated plug valve design lies in the application of Pascal‘s Law. The law states that a unit pressure applied to the liquid contained in a sealed vessel is transmitted to every part of the liquid with undiminished force, thus multiplying the force many times, depending on the area of the interior of the vessel. The sealant, under pressure developed by sealant injection, supplies the hydraulic means for lifting the plug from its tapered seat when and if that force is needed to free the plug.

You can find out more about which cookies we are using or switch them off in settings.

This website uses cookies so that we can provide you with the best user experience possible. Cookie information is stored in your browser and performs functions such as recognising you when you return to our website and helping our team to understand which sections of the website you find most interesting and useful.

Strictly Necessary Cookie should be enabled at all times so that we can save your preferences for cookie settings.

If you disable this cookie, we will not be able to save your preferences. This means that every time you visit this website you will need to enable or disable cookies again.

This website uses Google Analytics to collect anonymous information such as the number of visitors to the site, and the most popular pages.

Please enable Strictly Necessary Cookies first so that we can save your preferences!